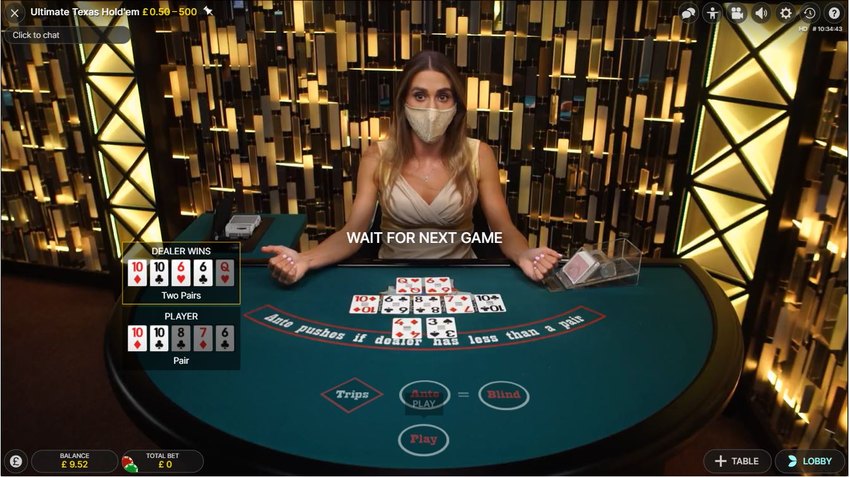 Texas Hold’em is arguably the most famous poker variant in the world, and the live casino version does a great job of creating the sense of the real thing in a live dealer scenario.

Live casinos offer a fantastic alternative to poker fans who aren’t able to get to a real game, but still want a sense of the real world. Online poker networks can’t offer this in the same way so live dealer Texas Hold’em plugs that gap.

Obviously, it’s not possible to play in the same way you would in real life in a live dealer setting, but the game has managed to incorporate several betting rounds as well as the ability to raise and check, even though you are only playing against the dealer.

This actually creates a great training environment for anyone newish to the game as well, because you don’t have to contend with bluffs etc. but you do still need to make fairly quick decisions.

How Does it Work? 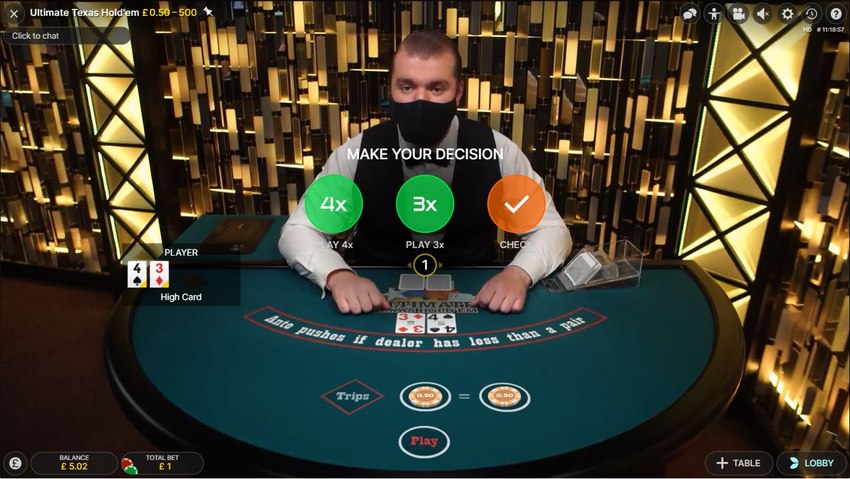 Before we talk about the practicalities of playing the game, let’s quickly run through the game itself since it is different to a regular game of Texas Hold’em.

During betting time, you must choose your chip size and place your ante bet. Don’t bet too high here, because a blind of the same amount will automatically be placed as well, so you should think of your ante as half of your original bet.

The game is then played out in 3 stages:

This is the game in brief and it plays out fairly quickly.

If you win and the dealer qualifies, your ante pays out at 1:1, your blind is paid out or pushed depending on the winning hand (from 1:1 for a straight to 500:1 for a royal flush), and if you chose to Play (raise) then that further bet will pay out at 1:1 too.

When you first load the game it’s a good idea to watch a few rounds first to get your head around the interface. A lot of the buttons available are nothing to do with the game, but can toggle things like the sound or the camera angles, and give access to game instructions etc.

You won’t see the in-game options unless you actually have a bet on, but once a new game begins a number of different coloured chips representing different values will become visible. You choose your stake by clicking on the chip value you want and then clicking on the ante betting space on the table.

The dealer uses a newly shuffled pack of 52 cards for each game, and will place it into the automatic shuffling machine at the end of the game. Two packs are used in this way on a cycle.

The software presents the betting areas and chips on the table so it feels very realistic, and betting time is shown using a countdown timer.

When the dealer draws a card from the shoe, it is dragged over a device similar to a barcode scanner, which reads the card so that the software knows what is on the table. You can see the real cards on the table but you can also see a computer generated image of them off to the side, and this is where the software identifies your strongest hand at each point in the game so you know where you stand.

During the pauses in the game your options to Play or Check will be displayed graphically, with a countdown timer showing how much time you have to make a decision.

Texas Hold’em can be played by an infinite number of players via a live casino, and although each player is playing the same hand, they can all make different decisions thanks to the way the software has been set up. 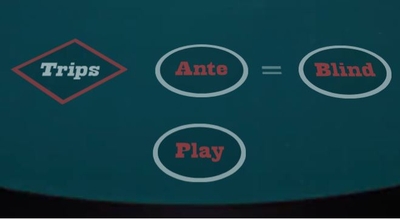 There is one regular side bet you can make with Live Casino Texas Hold’em, and that is the Trips bet.

The bet can only be utilised if you have also bet on the game itself, and it must be placed before betting time is over just like a regular bet.

This side bet is a winner if your final five card hand is 3 of a kind or better, regardless of the dealer’s hand. So even if the dealer beats your hand, you can still win on the side bet.

The payout is scaled too, so while the lowest you can win is 3:1 for 3 of a kind, you could bag 50:1 for a royal flush, and in that situation it is highly likely that you will be winning your regular bets as well.

There are further side bets available in Texas Hold’em Bonus Poker, a variation, but we will cover that later. 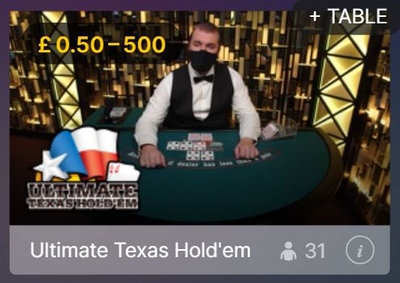 Although the lowest chip denomination in this game is 50p, a blind is automatically placed when you place your ante, upping the minimum required stake to £1.

On top of this, once you get to the final stage of the game you are required to either play x1 (so add one more chip to your bet) or fold, so if you want to see the game through to the end the minimum stake is actually £1.50 per game.

At the other end of the scale, the maximum bet stands at £500 (it’s £1000 for the variation we talk about below), but again this only applies to the ante.

That means you need to double it to actually play the game and then add another £500 minimum on top to see the game through, making £1,500.

Like the game’s simpler cousin, Casino Hold’em, Live Texas Hold’em has just a single game variation, but if there was one game that developers would want to build on it would probably be this one thanks to its popularity. 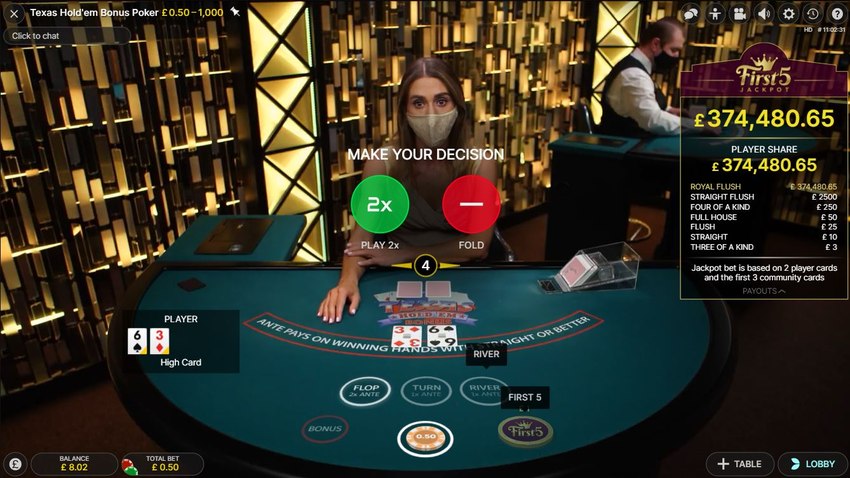 This version of the game is similar in the way it looks and feels, but it is played slightly differently and it also has a progressive jackpot attached as well as a further side bet.

This version of the game allows players to fold after the initial deal and there is no blind, but if they want to play on they must bet x2 to get to the flop. Once at this point the ability to check becomes available but a x1 raise is another option, and the same goes for the final stage when the river is placed.

The Bonus side bet is settled based on the player’s and the dealer’s first two cards only. There are various different ways to win but all are based on pairs being dealt, suited and unsuited, with payouts ranging from 3:1 to 1000:1. You can place any amount you want on this side bet.

The First 5 Jackpot costs £1 to play, and pays out set amount for hands worth 3 of a kind up to a straight flush. However, should the player be dealt a royal flush, the progressive jackpot will be shared between all players who had the correlating side bet placed for the game round.